Eleven people with Wright State connections, including the chair of economics and an events director at the university, were named to the Dayton Business Journal’s 2021 “Forty Under 40” list of those honored as the region’s future leaders.

It marks the 24th year the journal has recognized the region’s brightest young professionals. More than 200 people were nominated.

Honorees include Andrew Beauchamp, Ph.D., professor and chair of the Department of Economics in the Raj Soin College of Business.

Beauchamp, who joined the faculty in 2015, teaches different areas of applied microeconomics, which includes topics such as fertility, crime, retirement and marriage. 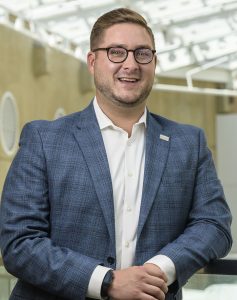 Nick Warrington, the director of events and community engagement for the College of Liberal Arts

Also named to Forty Under 40 was Nick Warrington, the director of events and community engagement for the College of Liberal Arts and a 2012 graduate of Wright State.

Warrington, who served as assistant director of alumni relations for five years, was tapped in 2019 to oversee ArtsGala, Wright State’s annual premier arts event and fundraiser.

Nine other Wright State alumni were on the Forty Under 40 list:

Previous honorees selected for the Forty Under 40 Hall of Fame by the Dayton Business Journal’s editorial board were Wright State alumni Mohamed Al-Hamdani ’03, ’19; Erica Fields ’03, ’05; and Andy Platt ’09. Your profile cover was changed successfully!

Are You Sure Want To Continue
Continue